This was indeed an evening of festive food, fun and frolics.  Members contributed brought in tasty food, fizz and soft drinks were provided, and a secret santa and raffle were held. This was all accompanied by a special CDWI Christmas radio show made for us by Stuart White. Our thanks go to him for a very special selection of music and lots of fun.  The left over party food was taken to the Camberley all night café where it was gratefully received.

The subject of our speaker,Sharon Girling’s, talk was keeping safe online. Sharon began by telling us about her background and her current work. She then gave us some interesting statistics and facts about our online behaviour today.  We were asked to get out our mobile phones so that Sharon could explain and demonstrate many ways in which we were, unknowingly, sending out information about ourselves, our movements, our preferences and lifestyles to any organisations and individuals who may be interested for various reasons, while showing us how we could prevent this and giving us many useful tips as to how we could keep ourselves safe online.  This fascinating talk was followed by our AGM.

Amanda our President gave gifts to the retiring Committee members – Denise, Caroline and Jean – in appreciation of their service and then Amanda, herself, was presented with a gift of theatre vouchers from all of the Camberley Diamond WI members.  Following voting, Judy Campbell is our new President, June Phillips remains as Treasurer and Mary Glauert is our new Secretary.  Other committee members are Alison Metcalfe, Annie Ward, Shirley Faulkner and Tricia Curzon-Tompson.

Dr Jane Orr is a retired local GP who is married to a military historian. Since her retirement she has been researching the history of the Spanish Flu epidemic of 1918, which, she told us, did not begin in 1918 and nor did it begin in Spain!   She explained that Spain was a neutral country in the 1914-1918 War and, as such, was the only country willing to divulge information about the number of deaths from flu. During the course of the epidemic 3-5% of the world’s population died and during one 12 week period there were 2,000 deaths a day. Dr Orr explained to us in graphic detail how the flu virus works to attack our bodies – quite horrifying.  She then she showed us how it had spread and mutated during the course of its rampage. Her very interesting talk was followed by questions.

Andy Robertshaw was a popular speaker at Camberley Diamond in 2015 and so he was back by popular demand. His theme was the making of the film ‘War Horse’ which has also been produced for the stage in the West End and elsewhere. He gave a fascinating and hilarious insight into the making of the film ,working alongside the director Stephen Spielberg as an historical and military advisor.. He regaled us with anecdotes about the dramas which were performed on and off set,  involving the actors and ‘extras. He explained that there were several different horses playing the main role of Joey because the horses only had a two-hour attention span, whereas the actors filmed for twelve hours or more. The film demonstrated the comradeship between man and horse.  The talk and accompanying power point illustrations were fascinating.

Ray has a collection of all the No.1 hits since 1952 and he began the evening by playing some of his discs and asking members to identify the artists and the year. This was followed by members requesting a No. 1 from a date significant to them.  Then followed an evening of popular music, interspersed with some of Ray’s humour and information about the songs and the artists.  We all  joined in with singing and dancing and enjoyed this happy, hot evening together.

Unfortunately Hatto’s was unable to come.  However Gareth Banner, a retired officer who had worked in Military Intelligence, stepped in to give a fascinating talk. He told us his experiences in Bosnia and reminded us of the horrors of war. He showed us slides of maps, photos of well known figures and pictures of bombs that had been made to look like ice creams and dolls. Gareth was responsible for tracking many well known war criminals, including Amed Zuhair – the terrorist who killed over 70 tourists at the Temple of Hatshepsut near Luxor. Members asked him many in-depth questions and all agreed that it had been an extremely interesting talk. Gareth has offered to return in the future to talk to us about his time on Kosovo which we very much look forward to.

Sally, Gabi and Robyn, from Mrs Pott’s Place, were welcomed and they gave a short presentation on Mrs Pott’s Place and the crafts available – not just pottery painting pottery but also silk painting, glass fusion and much more.  There was a selection of mugs, plates and bowls for us to choose from to paint and decorate. Sally gave us a few ideas and tips and then allowed us to explore our creative sides with the paints, brushes and sponges. All the members enjoyed themselves and some lovely (and some really lovely) crockery was produced.At the end of the evening, the Mrs Pott’s ladies took our creations away to be fired and they will be available for collection at our next meeting in June.  A fun evening. 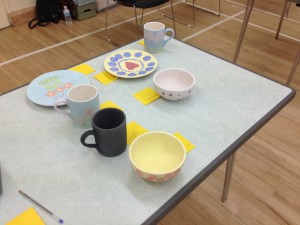 9th April THE LISA MAY FOUNDATION

Our speakers were John May and Cheryl D’Cruz from the Lisa May Foundation Charity.  John has been very involved in local affairs and politics, serving as deputy Mayor and then Mayor of Surrey Heath  and as a local councillor. He explained that after his daughter, Lisa, died in the Boxing Day Tsunami of 2004.  he realised that there was a lot he could do to help other charities which did not have his connections.  As well as helping projects in Thailand in the aftermath of the Tsunami.he decided to support three local charities.   Prostate Cancer by paying for extra nursing care at The Royal Surrey Hospital; a dishwasher for Parity which helps people with disabilities and Surrey Young Carers by providing money to enable the young carers aged between 8-15 years old to have a break enjoying different pursuits.  It was a fascinating insight into the work of this charity.

During refreshments members were invited by Jenny Thornton and her staff from the Massage Company to have a shoulder and neck massage.  Judging by the queue this  proved very popular. The Massage Company also kindly donated a raffle prize.

At the beginning of the meeting members were told about CAMFEST, the arts and crafts festival taking place in Camberley 30 June / 1 July.   Details of the various activities were given and members were asked to consider ways in which Camberley Diamond WI could be involved.

This was followed by a very interesting talk from Sarah Squire from Squires Garden Centres.  Sarah is the granddaughter of David Squires who began the business in 1936.  It has been trading in Surrey and the London area since then.  She gave us a brief history of Squires and a guide to their local centres as well as a description of how the business has developed and where it is going in the future.

Our speaker was Stephanie Nokes and her dog Gus, who is a PAT dog.  Stephanie explained that Pets As Therapy (PAT) was set up in 1983 to promote the use of healthy dogs as therapy in rest homes, day centres, hospices and some hospitals. They also visit schools to encourage reluctant readers to read to the dog.

The charity is now European wide and has 9,500 PAT dogs and some cats. Stephanie explained how stroking the dogs caused people to relax and feel contentment and often encouraged conversation about their own dogs or dogs they knew. Stephanie related incidents that had happened with Gus.

She explained how Gus, a black Labrador, was interviewed for the ‘job’.  This was to ensure that he was  healthy and had the right temperament for the work which he would be doing. While Stephanie spoke, Gus visited members around the room to be stroked and patted.  He also kept a careful eye on the refreshments! 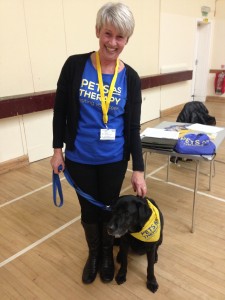 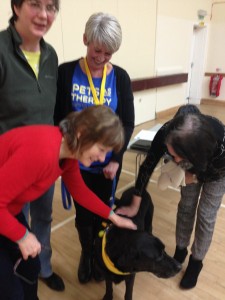 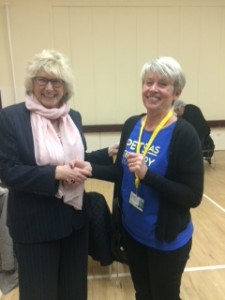 Our first speaker of the year was Beverley Edmondson from Beverley Edmondson Millinery.  She explained how she became a milliner at a very young age having started out in theatre costumes.  She has now been in business for eight years and sells hats and accessories in her shop in Farnham. She began by demonstrating how a hat is made. It was amazing to see how the piece of felt took shape in front of us as Beverley steamed and pulled the fabric over a mould.  Beverley believes that there is a hat to suit anyone and invited three members of the audience who ‘didn’t think that they looked good in hats’ to come to the front so that she could pick a hat for them…..and yes, the chosen hats did suit them!  The audience was fascinated by Beverley’s talk and demonstration and during refreshments many members tried on the hats and accessories and made purchases. Beverley donated 25% of her sales that evening to our WI for a charity of our choice. 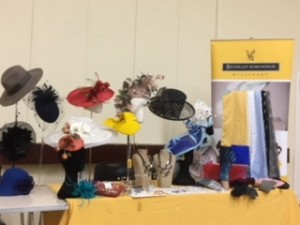